InnoVint released an update on Tuesday, June 2, 2020. This new release included a change to the cost distribution algorithm as it relates to direct fruit costs. See below for more details on the system rules and how the update affects direct fruit costs after June 2.

Direct fruit costs apply to a juice or wine lot only after the lot, and all related lots, are tracked in volume. While the lot contents are tracked in weight (eg tons), the lot cost will display as 'pending'.

'Related' lots are lots that share a single fruit source in the same vintage. For example, there may be multiple lots that share the same vineyard component due to different processing actions - 5 tons are processed to volume (ie direct to press), while another 5 tons from the same vineyard block is processed to weight (ie crush to tank), then bled via saignée, and finally drained and pressed. All weight must be converted to volume via Juice Bleed/Saignée or Drain & Press action before costs are distributed and applied.

InnoVint calculates the cost per gallon using the following formula:

The cost per gallon is then multiplied by the volume produced via Juice Bleed/Saignée and Drain & Press actions for each lot. 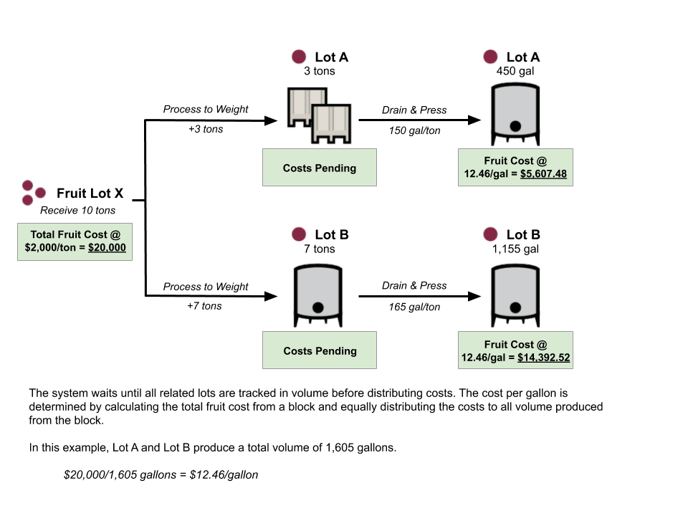 Direct fruit costs are applied to a lot at the time of the Process action (ie Process to Volume and Process to Weight).

Fruit costs are determined by the total weight processed from a fruit lot, and then distributed to the juice or must lot(s) in the Process action.

** This calculation accounts for any difference between the tons removed from the fruit lot and the tons that are processed into the juice lot. For example, 10 tons might be removed from a fruit lot in a process action, but only 9 tons are processed into the juice lot. In this case, InnoVint will proportionally distribute the cost of the 10 tons into the 9 tons, essentially concentrating the overall cost per ton.

Cost per block and Cost per acre

InnoVint proportionally distributes the cost per block or acre according to the total tonnage received from the block per vintage and the distribution of that tonnage at the process step.

Please note that InnoVint will distribute and apply costs using all the submitted information available at the time of the process step.

The cost per unit of a dry goods batch is determined by the total amount received and the total costs across all 'Receive' actions for the batch. Cost per unit is not affected by on hand inventory or batch adjustments. If on hand inventory is negative, the batch will also show a negative cost on hand; all subsequent actions using the dry goods batch will continue to remove costs and inventory from the on hand values, and the costs will continue to be added to involved lots.

As additives are used via 'Addition' actions, the cost per unit of the additive batch is directly applied to the involved lot(s). As the wine lot is subsequently transferred and blended, the direct additive costs are proportionally distributed downstream.

Packaging costs are calculated and reported as part of the Finished Goods costs for each recorded 'Bottle' action. The used and scrap values entered per batch are combined for a total Packaging (Direct) cost. To view the breakdown of used vs scrap costs per 'Bottle' action, download the Bottled Costs report from the Cost Explorer.

Keep in mind that Packaging costs added as a cost item will behave differently than direct costs, and are distributed proportionally as part of the total lot cost. This is the same for all cost items.

For example, a juice/must lot has a total lot cost of $10,000. A bleed action recorded on the lot produces 50 gallons. Later, the drain and press action produces 750 gallons, resulting in a total volume of 800 gallons produced.

Lot costs are distributed proportionally by volume as wine is moved, blended, or split into other lots. Volume gains and losses are expected as a result of these movements.

Inventory gains and losses do not carry any costs. In the case of losses, the lot costs are concentrated into the remaining volume and the cost per gallon increases. The opposite occurs when there is a volume gain (ie the lot costs are spread across the new volume).